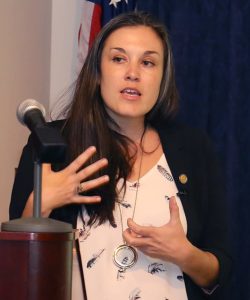 Dr. Rebekka King is an Associate Professor in the Department of Philosophy and Religious Studies at Middle Tennessee State University. She holds a Ph.D. in Religious Studies from the University of Toronto. She teaches courses on global Christianity, Judaism and Islam, comparative religions, religion and film, the figure of Jesus, and the academic discipline of religious studies. Before coming to MTSU in the fall of 2013, she held a postdoctoral fellowship at the Candler School of Theology, Emory University. Trained as a cultural anthropologist, Dr. King’s research looks at the negotiation of boundaries within contemporary North American Christianity. Her first book (under contract with New York University Press) outlines the development of progressive Christianity as a variety of Christianity that is simultaneously secular and religious. Her second major project which has received funding from the American Academy of Religion Individual Research grant and MTSU’s FRCAC program explores the syntheses of Judaism, indigenous religions, and Christianity within a movement known as Jewish Affinity Christianity. Dr. King currently serves as the Vice President of the North American Association for the Study of Religion, Co-chair of the Sociology of Religion program unit of the American Academy of Religion, and is one of the editors of Critical Research on Religion.

Ting Guo chats with Rebekka King and Tenzan Eaghall about their new edited volume, Representing Religion in Film (Bloomsbury 2022), and they explore the “ideological blindspot” of existing studies on religion and film, have a listen!

Whither the Sociology of Religion?

I cannot help but think that the field’s continued reliance on these classical thinkers works to limit the possibilities for analysis to those concerns raised by such figures even in the midst of increased calls for non-Western scholarly interlocutors and more diverse research sites.Grace Davie’s discussion of the sociology of religion provides a comprehensive overview of the field. She offers insights garnered from her own eminent career within British sociology of religion and speaks ...