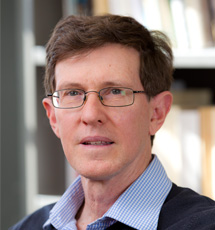 Peter Harrison is currently Director of the Centre for the History of European Discourses at the University of Queensland, and was formerly at the University of Oxford as the Idreos Professor of Science and Religion.  He has published extensively in the area of cultural and intellectual history with a focus on the philosophical, scientific and religious thought of the early modern period. He has been a Visiting Fellow at Oxford, Yale, and Princeton, is a founding member of the International Society for Science and Religion, and a Fellow of the Australian Academy of the Humanities. In 2011 he delivered the Gifford Lectures at the University of Edinburgh (first lecture here).

His five books include, most recently, Wrestling with Nature: From Omens to Science (Chicago, 2011)—an edited collection which surveys conceptions of science from antiquity to the present—and The Cambridge Companion to Science and Religion (Cambridge, 2010). He has published over 60 articles or book chapters. He is currently editing his Gifford Lectures under the working title of ‘Science, Religion and Modernity’ and is also working on a project concerned with conceptions of progress in history and the historical sciences.