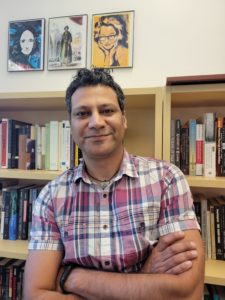 Dr. Khurram Hussain holds an A.B. in Religion and Physics from Bowdoin College (1997) and a Ph.D. in Religious Studies from Yale University (2011). He is broadly interested in exploring the possibility of a robust critical conversation across diverse cultures and traditions, and has extensive training in comparative ethics, historical sociology and modern Western philosophy. His first monograph, Islam as Critique: Sayyid Ahmad Khan and the Challenge of Modernity (Bloomsbury, 2019), is an exploration of the work of 19th century Indian Muslim reformer Sayyid Ahmad Khan in a comparative perspective with Western thinkers like Reinhold Niebuhr, Hannah Arendt, and Alasdair MacIntyre. His second book, The Muslim Speaks (Zed Books, 2020), is a detailed examination of the tropes and discourses surrounding the category of Islam in modern Western public spheres.

The Critical Humanist Study of Islam

What sort of discursive traps to we fall into when talking about 'Islam' or 'the West'? How might we reframe our discussions with a critical humanist approach? In this episode, Khurram Hussain joins Andie Alexander to discuss his recent book, The Muslim Speaks (Zed Books, 2020) explore the benefits of critically engaging these issues in a way that takes seriously the human-focused study of religion.