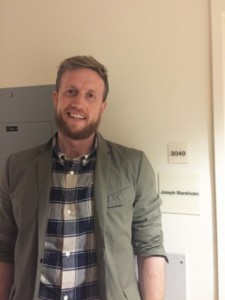 Joseph Blankholm is Assistant Professor of Religious Studies at the University of California, Santa Barbara. His research focuses on atheism and secularism, primarily in the United States. Using qualitative, quantitative, and historical research methods, Joe’s work shows how the boundaries between secular, spiritual, and religious have shifted over time and how those shifts impact the ways we think about religion and what counts as religious. He has published an article in the Journal for the Scientific Study of Religion called “The Political Advantages of a Polysemous Secular” and has another forthcoming in the same journal, which he-coauthored with Alfredo Garcia. He also has chapters forthcoming in edited volumes about secularism and religious indifference, and he is currently working on an essay on atheism for the Oxford Encyclopedia of American Religion. Joe is also a co-founder and co-chair of the American Academy of Religion’s Secularism and Secularity Group.

In this interview, we first focus on the origins of the term “secularism,” the proliferation of its meanings, and the uses to which it is put in Anglo-American contexts. Then we discuss the uses of the terms secularism and the secular today, particularly using a specific case study from Joe’s research on American nonbeliever organizations.

In acknowledging how capacious and even misleading the “religiously unaffiliated” label has become, we might wonder if its growth is symptomatic of a taxonomy that has failed to keep pace with restructuring. In his wide-ranging interview with Dusty Hoesly, Wade Clark Roof both re-emphasizes the importance of the baby boomer generation and suggests some ways to think beyond it. In the second half of the interview, in particular,...