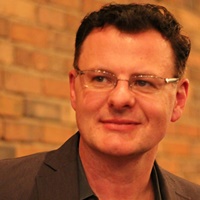 John R. Shook is a scholar and professor living in the Washington, D.C. area. He was a professor of philosophy at Oklahoma State University from 2000 to 2006, and then joined the faculty of the Science and the Public online EdM program at the University at Buffalo, and he continues to be an instructor for this online program. Also, since 2006, he has worked for several secular and humanist organizations, including the Center for Inquiry, the American Humanist Association, the Humanist Institute, and the Institute for Humanist Studies, and for several years he was President of the Society of Humanist Philosophers. John has authored and edited more than a dozen books about science, pragmatism, naturalism, ethics, politics, and religion. His recent book is The God Debates: A 21st Century Guide for Atheists and Believers (and Everyone in Between), and he also edited a volume of William James’s writings on pragmatism and a volume of Paul Kurtz’s writings on skepticism. He and Phil Zuckerman are editing the forthcoming Oxford Handbook of Secularism. He has published many articles about naturalism, secularism, and humanism in academic journals and magazines such as Free Inquiry, The Humanist, Humanist Perspectives, Think, and The Philosopher's Magazine.