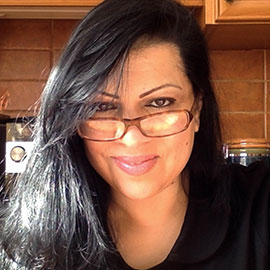 Dr. Jasmin Zine is a full professor of Sociology, Religion and Culture, and the Muslim Studies Option at Wilfrid Laurier University, Canada, and also an affiliated faculty member with the Islamophobia Research and Documentation Project (IRDP) at U.C. Berkeley, California.

She has numerous publications on Islamic feminism and Muslim education in the Canadian diaspora. Also, Dr. Jasmin Zine has been involved in the national study funded by the Social Sciences and Humanities Research Council (SSHRC) on the impact of 9/11 and domestic security discourses and policies on Muslim youth in Canada. As an education consultant she has developed award winning curriculum materials that address Islamophobia and anti-Muslim racism.

As an education consultant she has developed award winning curriculum materials that address Islamophobia and anti-Muslim racism and has worked as a consultant with the Office for Democratic Institutions and Human Rights at the Organization for Security and Cooperation in Europe (ODHIR/OSCE), the Council of Europe, and the United Nations Educational, Scientific and Cultural Organization (UNESCO) on developing international guidelines for educators and policy-makers on combating Islamophobia and discrimination against Muslims. In Canada she served as co-Chair of the Islamophobia Sub-Committee of the Ontario Anti-Racism Directorate. Dr. Zine is faculty in the Critical Muslim Studies Institute in Granada and is an affiliated faculty member with the Islamophobia Research and Documentation Project (IRDP) at U.C Berkeley. She currently serves on the editorial board of the Critical Muslim Studies journal Re-Orient.

Her books include: Canadian Islamic Schools: Unraveling the Politics of Faith, Gender, Knowledge and Identity (2008, University of Toronto Press) the first ethnography of Islamic schooling in North America and the edited collection, Islam in the Hinterlands: Muslim Cultural Politics in Canada (2012, University of British Columbia Press) and a co-edited book (with Lisa K. Taylor) Muslim Women, Transnational Feminism and the Ethics of Pedagogy: Contested Imaginaries in post-9/11 Cultural Practice (2014, Routledge Press). Dr. Jasmin Zine is currently finishing a book manuscript based on this study tentatively titled: Under Siege: Islamophobia, Radicalization, Surveillance and Muslim Youth Counter Publics.

Preserving identity and empowering women. How do Canadian Muslim schools affect their students?

In this interview, Dr. Jasmin Zine talks about Muslim schools in Canada and their impact on their students’ identity development and integration in the society. Having served for decades as a tool to preserve a particular religious identity, Islamic schooling also plays a crucial role in empowering female students. In some cases, Muslim schools have become a safe haven, especially for women, “a place where their identity is not in question, where they can feel safe and comfortable”.