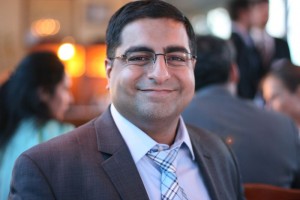 Hussein Rashid (http://www.husseinrashid.com/) is an academic, activist, and lecturer. He is deeply committed to community engagement and community building. A native New Yorker and proud Muslim, he believes his faith demands that he leave the world a better place for the next generation.

He graduated with a BA from Columbia College of Columbia University, and then went to the Harvard Divinity School, where he completed a Masters in Theological Studies. He then received an MA and PhD from Harvard’s Near Eastern Languages and Cultures. His dissertation focused on the role of music as a means of integration amongst South Asian immigrants to the US and the UK. His larger research interest is the representation and self-representation of Muslims in America. He is currently expanding his research to include graphic novels and the Muslim-American blogistan. His interest in arts and cultures of Muslim-America is demonstrated through various museum talks he has given, including at the Carlos Museum at Emory and the MFA-Houston.

His theology background allows to work with various faith communities to build on commonalities by taking differences seriously. He has taught at Virginia Theological Seminary and Reconstructionist Rabbinical College. He believes that engaging with faith communities is also important, and teaches at Quest: A Center for Spiritual Inquiry, currently based at the Cathedral of St. John the Divine, and one of New York’s largest interfaith education centers. He has lectured at Central Synagogue, Park Avenue Synagogue, All Souls and St. Bart’s. He is a 2010 Ariane de Rothschild Fellow in Cross Cultural Networking and Social Entrepreneurship, a training program involving Columbia Business School, Cambridge University, and ESSEC.

He attempts to utilize his knowledge and expertise in the political realm as well. He aided President Lennart Meri of Estonia in establishing trade relations with India, Pakistan, and Iran. He served as a consultant to two US Presidential candidates and continues to work with the US State Department. He worked, through Harvard’s Islamic Legal Studies Program, on position papers concerning the drafting of the Afghan Constitution. He is a term-member (2010-2015) of the Council on Foreign Relations. He is on the advisory board for Our Shared Future.

He is actively involved in both mainstream and social media. He has appeared on ABC, CBS, Fox, CNN, the BBC. Channel 4 (UK), Iqra TV (Saudi Arabia), Russia Today, The Guardian UK, The New York Times, The Washington Post, Listen Up TV (Canada), and NPR. He is an Associate Editor at Religion Dispatches (http://www.religiondispatches.org/). He is an active blogger at his own site, islamicate, and his work has appeared on Goat Milk, Huffington Post, City of Brass, AltMuslimah, and Talk Islam.