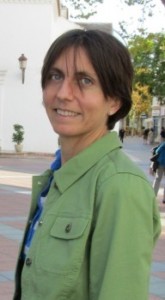 Gladys Ganiel is Assistant Professor in Conflict Resolution and Reconciliation at Trinity College Dublin in Belfast, the Irish School of Ecumenics. She has degrees from Providence College (Rhode Island, USA) and University College Dublin, where she earned her doctorate in Politics in 2005. Her primary research interests are religion and conflict, Northern Ireland politics, evangelicalism, congregational studies, qualitative research methods, and religion and transition in South Africa and Zimbabwe. She has authored Evangelicalism and Conflict in Northern Ireland (Palgrave, 2008) and co-authored (with Claire Mitchell) Evangelical Journeys: Choice and Change in a Northern Irish Religious Subculture (UCD Press, 2011) and (with Gerardo Marti) The Deconstructed Church: Understanding Emerging Christianity  (Oxford, 2014). She has also published articles on religion, conflict and reconciliation in journals such as Journal of Peace Research, Democratization, Sociology of Religion, Irish Political Studies, Nationalism and Ethnic Politics, and Journal of Religion in Africa.

She was an investigator on the 3-year IRCHSS funded research project Visioning 21st Century Ecumenism (2009-2011), with primary responsibility for conducting surveys of faith leaders and laypeople, as well as conducting focused case studies of various expressions of faith on the island of Ireland. Previously funded research projects include Religion, Reconstruction and Reconciliation in Zimbabwe (the Association for the Sociology of Religion Fichter Grant) and her doctoral research on Evangelicalism and Conflict in Northern Ireland (Royal Irish Academy). She serves on the editorial board of the Africa Peace and Conflict Network and is on the Board of the European Sociological Association's Sociology of Religion Network.

She blogs about religion and politics at www.gladysganiel.com.