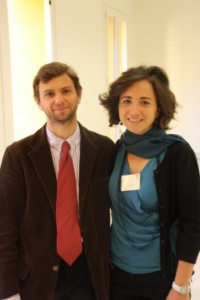 Francesca Cadeddu is a post-doctoral researcher at the Department of Social and Institutional Sciences in Cagliari in Italy. She is also a fellow researcher at the Foundation for Religious Studies in Bologna, Italy.

She wrote her PhD dissertation on the Jesuit priest and theologian John Courtney Murray, an important figure in U.S. Catholicism who featured prominently in the development of the the Second Vatican Council’s draft of Dignitatis Humanae (which the interviewer learned is pronounced "humaneh" rather than "hoomanay" shortly before the interview, hence the interviewer's hesitation).

Having researched at two of the most prominent institutions for Catholic Studies in the U.S., Georgetown and Notre Dame, Cadeddu visited Notre Dame by means of a research grant from Cushwa Center for the Study of American Catholicism at the University of Notre Dame in the spring of 2015.