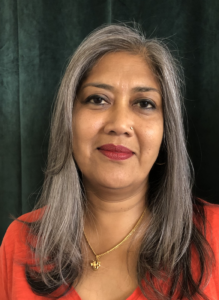 Falguni A. Sheth is Professor of Women’s, Gender and Sexuality Studies at Emory University. She holds a Ph.D. in Philosophy and has published numerous articles and books, including Toward a Political Philosophy of Race (SUNY Press, 2009) and Unruly Women: Race, Neoliberalism, and the Hijab (Oxford University Press, 2022). Her most recent book explores the racial dynamics of juridical discourses that discipline Muslim women of color and Black Muslim women in the United States. Sheth’s areas of teaching and research include postcolonial theory, transnational feminist studies, critical philosophy of race and race studies, feminist political theory, anticolonial and empire studies, and political and legal philosophy.

Sheth’s research explores the intersections of violence, security, and political ontology as these lead to technologies of race and racialization as a strategy of political and social management of various populations. Tackling these issues requires the integration of the philosophy of race, critical race theory, postcolonial feminist theory, and political philosophy to expand the scope of feminist theory to include “feminist security studies of race.” By revealing how the legacies of war, violence, and colonialism are transformed via law, public policies, and cultural institutions to appear neutral, just, and liberal-democratic, her work reveals the mechanisms by which legal and cultural institutions work to maintain a veneer of security on behalf of their dominant populations.

Her work has been published in Hypatia, philoSOPHIA, Foucault Studies, Radical Philosophy Review, Contemporary Political Theory, the Hastings Women’s Law Journal, and the Journal of Aesthetics and Art Criticism, among other venues. Sheth has served as an Associate Editor at Hypatia, and on the Executive Committee of the Society for Phenomenology and Existentialist Philosophy (SPEP). She has was also a member of the Immigrant Rights Commission of San Francisco and is an organizer of the California Roundtable for Philosophy and Race. In addition, she has written pieces for a wide range of public venues, including Common Dreams, the Atlanta-Journal Constitution, and Salon.com, where she was a columnist on national security issues.

Contributions by Falguni A. Sheth

For our first episode of Season 12, Falguni A. Sheth joins RSP editor Andie Alexander to discuss issues of liberalism, racial discrimination, religious freedom, and governance with regard to Muslim women of color and Black Muslim women in the US.