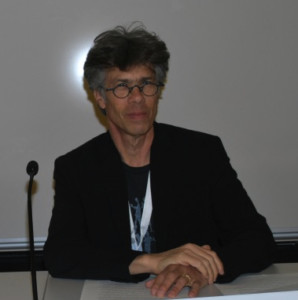 David Gordon White received his Ph.D. (with Honors) from the Divinity School at the University of Chicago in 1988. He also studied Hinduism at the École Pratique des Hautes Études in Paris, France, between 1977-1980 and 1985-1986.

A specialist of South Asian religions, White is the J. F. Rowny Professor of Comparative Religions at the University of California, Santa Barbara, where he has been teaching since 1996. Prior to coming to Santa Barbara, he taught at the University of Virginia between 1986 and 1996. There, he founded the University of Virginia Study Abroad Program in Jodhpur, India in 1994. White is the sole foreign scholar to have ever been admitted to the Centre d’Études de l’Inde et de l’Asie du Sud in Paris, France, where he has been an active Research Fellow since 1992.

White is the author of five books. Four of these were published by the University of Chicago Press: Myths of the Dog-Man (1991); The Alchemical Body: Siddha Traditions in Medieval India (1996); Kiss of the Yoginı:” Tantric Sex” in its South Asian Contexts (2003); and Sinister Yogis (2009). His fifth book, The Yoga Sutra of Patanjali: A Biography, was published by Princeton University Press in May 2014. White is also the editor of Tantra in Practice (Princeton University Press, 2000): his introduction to that volume is considered to be the most comprehensive definition of the multi-faceted tradition known as Tantra published to date. Myths of the Dog-Man was listed as one of the “Books of the Year” in the 1991 Times Literary Supplement’s end-of-year edition; Kiss of the Yoginı was on the cover of the same journal’s May 20, 2004 edition. Sinister Yogis received an honorable mention at the 2009 PROSE awards and was listed as a book of note by CHOICE in 2011.

White has been the recipient of several research fellowships and grants, including a John Simon Guggenheim Foundation Fellowship (2007-2008) and three Fulbright Research Fellowships for India and Nepal. A panel organized by his former students to honor his scholarship was part of the program of the annual meeting of the American Academy of Religion, held at Chicago on November 1, 2008.

In its earliest uses, the word “yoga” meant “yoke,” primarily yoking a warhorse to a chariot. In the classical period, yoga took on a variety of other meanings, including yoking the mind-body complex through meditative practices, such as breath control and mantras, to achieve liberation. In this interview, ...

On the Outside Looking In: Western Appropriations of Eastern “Subtle Body” Discourse

To my knowledge, prior to the nineteenth century, suksma sarira was never applied to the body of a living human being. In India’s yogic and tantric literature, this has simply been called “the body,” I find Jay Johnston’s endeavor to integrate what she acknowledges as Eastern concepts of the “subtle body” into Western conversations on subjectivity, ethics, perception, interpersonal relations,