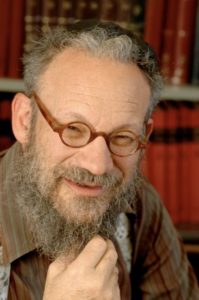 Professor Daniel Boyarin, Taubman Professor of Talmudic Culture and rhetoric, UC Berkeley ret. received his Ph.D. in 1975 from the Jewish Theological Seminary of America. He has been an NEH Fellow (twice), a Guggenheim Fellow, a Fellow of the Institute for Advanced Studies in Jerusalem, a holder of the Berlin Prize at the American Academy in Berlin and a Ford Foundation Fellow. He spent the academic year 2012-2013 as a fellow of the Wissenschaft Kolleg in Berlin and was a von Humboldt Forschung Preisträger at the FU Berlin in 2017. He is a fellow of the American Academy of Arts and Sciences since 2006.

Boyarin has written extensively on talmudic and midrashic studies, and his work has focused on cultural studies in rabbinic Judaism, including issues of gender and sexuality as well as research on the Jews as a colonized people. His most recent research interests centered primarily around questions of the relationship of Judaism and Christianity in late antiquity and the genealogy of the concepts of “religion” and “Judaism.” Current projects include a critical edition of the second chapter of Bavli Pesachim, a biography of Josephus for the Yale Jewish Lives, as well as a book to be entitled: The No-State Solution: a Jewish Manifesto. His books include Intertextuality and the Reading of Midrash (1990), Carnal Israel: Reading Sex in Talmudic Culture (1993), and A Radical Jew: Paul and the Politics of Identity (1994), and Unheroic Conduct: The Rise of Heterosexuality and the Invention of the Jewish Man (1997) all published by the University of California Press.

Dying for God: Martyrdom and the Making of Christianity and Judaism appeared at Stanford University Press in the fall of 1999 [French and Italian translations published]. Border Lines: The Partition of Judaeo-Christianity has been published by University of Pennsylvania Press in 2004 (winner of the AAR award for best book on religion in the area of historical studies in 2006.) Socrates and the Fat Rabbis in 2009 by the University of Chicago Press. The Jewish Gospel: The Story of the Jewish Christ was published in 2012 by the New Press (New York). A Traveling Homeland: The Talmud as Diaspora (Penn: 2016), Imagine No Religion [with Carlin Barton: Fordham: 2016]. Judaism: the Genealogy of a Modern Notion by Rutgers University Press in 2018 in the series Key Words in Jewish Studies. In press (2021) at Yale University Press is a book-length essay entitled: The No-State Solution: a Jewish Manifesto.

Genealogy of the Jewish Notion

Dr. Breann Fallon sits down with Professor Daniel Boyarin to discuss the difficulty of defining Judaism and Boyarin's new book Judaism: Genealogy of a Modern Notion