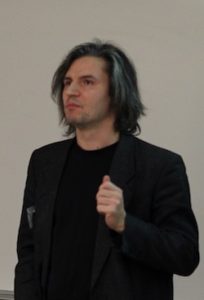 Atko Remmel is Senior Researcher in Religious Studies at the School of T &RS and also Researcher of Cultural Studies at the Institute of Cultural Research and Arts, University of Tartu, Estonia. His work discusses religion, religious indifference, national identity and more in Estonia, said to be one of the most secularised countries in Europe. He has a number of publications in this broad area, including “Religion, Interrupted? Observations on Religious Indifference in Estonia” in a book in which Chris Cotter, and a number of other RSP-friends, have chapters – Religious Indifference: New Perspectives from Studies on Secularisation and Nonreligion, ed. Johannes Quack and Cora Schuh. Hi is currently PI on the Understanding unbelief in Estonia project, part of the broader Understanding Unbelief programme.

The Study of Religion and National Identity in Estonia

Chris and Atko Remmel discuss Estonia, a context in which notions and debates on religion, atheism, and indifference are interrelated in complex ways with the history of nationalism, and two foreign religious-secular regimes: German Lutheran and Soviet Atheism.