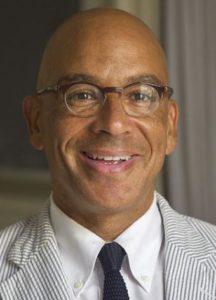 Dr. Andre C. Willis is an Associate Professor of Religious Studies at Brown University. He is a philosopher of religion whose work focuses on Enlightenment reflections on religion, African American religious thought, critical theory, and democratic citizenship as it relates to ‘religious’ notions of hope, recognition, and belonging. Willis earned a B.A. at Yale in Philosophy and his M.A. and Ph. D. at Harvard in the Committee on the Study of Religion. He is the author of Towards a Humean True Religion (2015) and is currently working on a manuscript about African American religion and politics, Afro-theisms and Post-Democracy. He has published articles in international journals such as Hume Studies, The Journal of Scottish Philosophy, Political Theology, Critical Philosophy of Race, and Radical America.

Amid mass protests against police brutality and systemic racism ongoing in the United States, RSP contributor Ben Marcus speaks with Andre Willis and Carleigh Beriont about race and religion in this month's Discourse episode.