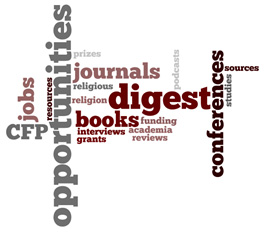 Welcome to the sixth RSP Opportunities Digest for 2014. As ever, please remember that we are not responsible for any content contained herein unless it is directly related to the RSP. If you have any content for future digests, please contact us via the various options on our ‘contact’ page. If you are enquiring about any of the opportunities listed below, please contact the organizers directly.

To skip to specific content within this digest, please use the table of contents to the right of your screen. This digest has been significantly pared down to basic details and web links. We hope this meets with your approval.

Those supplying calls for papers etc. must provide a link to external information, or a pdf containing the relevant information, otherwise we will not be able to include these in the digest.

Faculty of Humanities, School of History, and Department for Middle Eastern History, University of Haifa

More information in the attached pdf.

Disability in Jewish Thought and Culture

the blind: Disability in Jewish Thought and Culture

Gender, Religion and the Atlantic World

Wandering Myths: Transcultural Uses of Myth in the Ancient World

Encyclopedia of Psychology and Religion

The University of Cambridge, Centre of Islamic Studies. Start date no later than October 2014. Two-year, fixed-term position. The successful candidate will design and conduct original research into Islam or Muslims in the UK or Europe.

4 Jobs at the University of Copenhagen

Associate Professor in the History of Religions (1)

Associate Professor in the History of Religions (2)

The AHRC and British Academy are supporting a study to understand the issues faced by individuals in the period immediately following the award of their doctorate. Part of the study is a survey for Early Career Researchers (ECRs) asking them about their experiences. See here for the survey and more information:

Islamic Studies Pedagogy in Britain: Interrogating the Secular and the Sacred